I got an email from a gentlemen boasting labor data that even the Bureau of Labor Statistics hasn’t published yet! 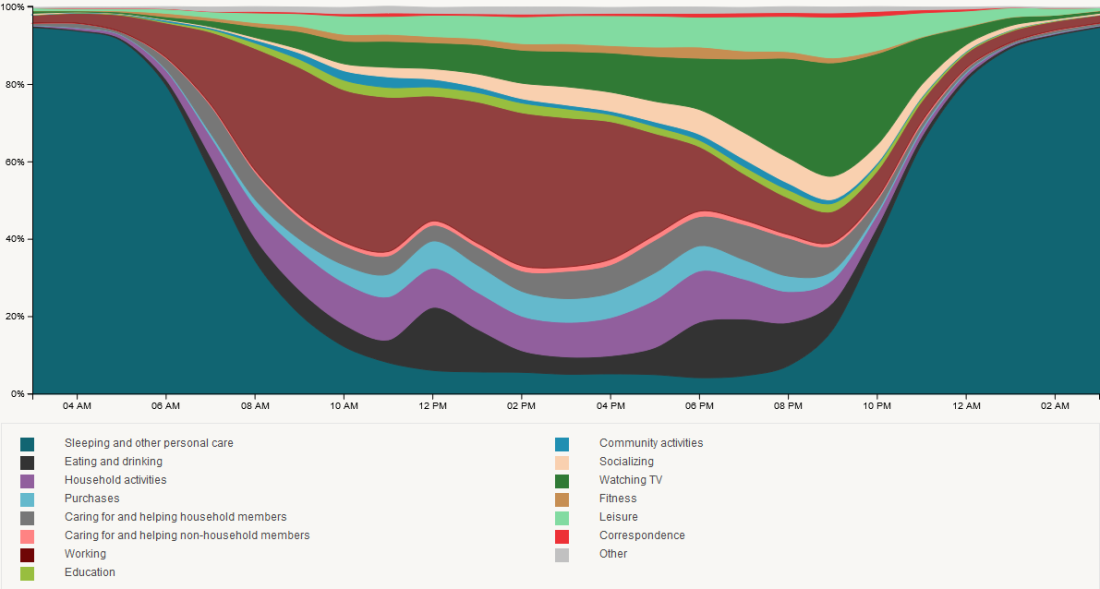 The data is pretty reliable, as it is from the Bureau of Labor Statistics. You can even break down the graphs into various demographics: men, women, 45-54 year olds, retirees….

Even though I am not American, the model predicts correctly that I am watching TV right now. The TV is on in the background as I type this, so close enough.

Check out the infograph here.

For all the flak China receives about its greenhouse gas emissions, the average Chinese produces less than a third the amount of CO2 than his American counterpart. It just so happens that there are 1.3 billion Chinese, and 0.3 billion Americans, so China ends up producing more CO2.

Carbon dioxide and other greenhouse gases, such as methane and carbon monoxide, are produced from burning petrol, growing rice, and raising cattle . These greenhouse gases let in sun rays, but do not let out the heat that the rays generate on earth. This results in a greenhouse effect, where global temperatures are purported to be rising as a result of human activities.

The below map shows the per-capita emissions of greenhouse gases:

As you can see, the least damage is done by people in Africa, South Asia, and Latin America. But these places also happen to be the poorest places: Because they don’t have much industry, they don’t churn out much CO2.

The below plot shows the correlation between poverty and green-ness. As you can see, each dollar of a rich person is attached to a smaller carbon cost than the dollar of a poor person. This is partially because rich people get most of their manufacturing done by poor people, but also because rich people are more environmentally conscious.

Lastly, here is a map of CO2 emissions per dollar of GDP, which shows how green different economies are:

CO2 emissions per Dollar of output are lowest in:

…and highest in the industrializing economies of Asia.

Kudos to Brazilian output for being so green, despite the country’s middle-income status. Were these statistics to factor in the CO2 absorption from rainforests, Brazil and other equatorial countries would appear even greener.

Data from the Word Bank. Graphics produced on R.

The QS Rankings are an influential score sheet of universities around the world. They are published annually by Quacquarelli Symonds (QS), a British research company based in London. The rankings for 2013 are out, and I have charted the rankings of this year’s top 10 over the last five years:

Observations from this year’s ranking:

Note that many of the universities are apart by tiny numbers (MIT, Harvard, Cambridge, UCL, Imperial are all within 1.3 points of each other), which increases the likelihood of bias or error influencing the ranking.

In any case, it appears futile to try and compare massive multi-disciplinary institutions by a single statistic.

However, larger trends – like MIT’s and Stanford’s ascendancy – are noteworthy.